Wadoryu Is Not Karate
“Wadoryu, the intellectual’s art!” Because Wadoryu isn’t predominantly a karate system, but more of an Atemi-Jujutsu system with karate techniques included within it, this puts a whole new perspective of thinking upon the practitioner.

Although we tend to ‘label’ ourselves as a Karate system, our blocks are completely different to karate, as we promote deflection and entering, synonymous to Jujutsu application, rather than striking the arm or leg to ‘block’, etc. We do not promote ‘strength’, as do karate styles, but speed and evasion. How many times do we hear in a karate dojo – “More Power!” “Lower Stances!”? Whereas generally in Wadoryu we hear “More speed!” “Relax and explode!”, etc. Ironically, as many of us know, Wadoryu was the first [non-karate] style to beat Japan at the World Karate Championships in the mid-60’s. The further irony was that the team that competed were also from the UK and who were trained by one of our most senior Wadoryu Masters, Tatsuo Suzuki 8th Dan Hanshi (a direct student of the Founder, Hironori Ohtsuka Meijin). Even today, the predominantly best fighters are from Wadoryu-based karate systems. However, what concerns me is that the more Wadoryu schools start to ‘conform’ to the way karate styles perform, the less chance Wadoryu retains its technical advantages over karate.

Even sport-karate competitions are now reducing the ‘Wado’ techniques allowed within fighting, such as our fast strikes (uraken, etc.), take-downs and foot-sweeps, etc. Why we attempt to remain in Karate styles and Sport Karate National Governing Bodies for competition still confuses me, especially when Wadoryu has so much potential on its own; it should be fighting itself to improve even further – Wado is Wado. Don’t drop or lengthen stances, as the karate-ka, get back to the higher stances and remain faster than karate, remain more effective against karate, remain Wadoryu.

Gary E Swift Hanshi.
The Founder of Wadoryu, Hironori Ohtsuka Meijin, said himself; “If Wadoryu was soup, then the karate part was a pinch a salt!” 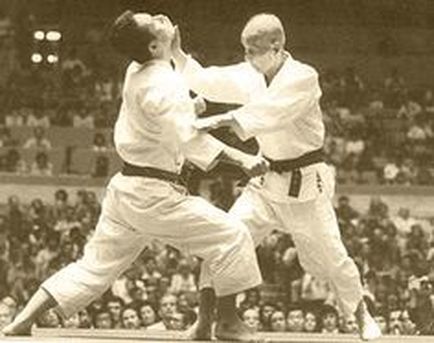