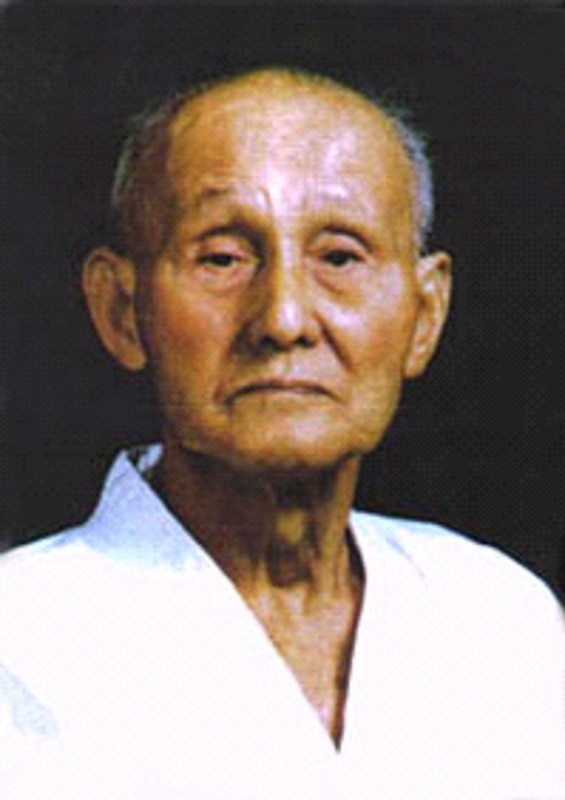 大塚 博紀 Ohtsuka-Hironori 10th Dan Meijin (1892 – 1982). The founder of Wado-ryu Karate. Hironori-Ohtsuka Meijin was born in Shimodate City, Ibiragi, Japan on the 1st June 1892. He was the first son of Tokujiro Ohtsuka, who was a doctor of medicine. 1892 was also the year that the Dai-Nippon-Butoku-Kai was established. He started training under Chojiro-Ebashi, an uncle of his mother, in April 1897 at the age of four, a style of training he would continue with, even at Waseda University in Tokyo.
In 1905 Ohtsuka Meijin entered the Shimozuma middle school, where he started Shindo-Yoshin-ryu Ju-jutsu 新道揚心流 under Tatsusaburo-Nakayama. In 1910 Ohtsuka Meijin entered Waseda University to learn commerce. In 1917 he started work at the Kawasaki bank; at this stage he was learning numerous styles of Ju-jutsu. Ohtsuka Meijin met, and became good friends, with the founder of Aikido, Morihei-Ueshiba. In May 1919 he became master of ‘bone-setting technique’.
On the 1st of July 1921 he received his Shindo-Yoshin-ryu Ju-jutsu licence from Tatsusaburo-Nakayama, and so became the Highest Authority. He started his Karate training with the famous Gichin-Funikoshi in July 1922, a style known as Karate-jutsu. Ohtsuka Meijin met Funikoshi Sensei during a martial-arts demonstration at the Sports Festival organised by the Japanese Educational Department. Funikoshi Sensei agreed to teach Ohtsuka Meijin all he knew about Okinawan Karate-jutsu, the lessons started that same day. Within one year Ohtsuka Meijin had studied all the Kata within the system. Even after this time Ohtsuka Meijin could see the ‘shortfall’ in the Kata-only system. It was explained to him that all of the concepts of ‘Budo’ were within Kata, and that was the only aspect to train.
In 1924 Ohtsuka Meijin introduced Yakusoku-gumite to the system, this concept of ‘partner-work’ revolutionised Karate-jutsu. He also developed Idori-no-kata, Tachiai-no-kata, and Shirahatori-no-kata. In 1928 he was ‘Shindo-Yoshin-ryu-Shihan’, the Chief Instructor of his Shindo-Yoshin-ryu; he also set up a ‘bone-setting’ practice at this time. In 1929 he registered with the ‘Nippon-Kobudo-Shinko-Kai’, the Japanese Martial-arts Federation. In 1934 Ohtsuka Meijin was recognised as an independent style, and started teaching full-time. Due to his dedication to Karate he had to close his ‘bone-setting’ business.
In 1938 Ohtsuka Meijin registered his new style as Shin-Shu-Wado-ryu. In 1939 all Karate styles were asked to register their systems with the ‘Dai-Nippon-Butoku-Kai’, Ohtsuka Meijin named his style Wado-ryu. Other styles that registered were Goju-ryu, Shito-ryu, and Shoto-ryu (Shotokan-ryu).
In 1940 on May the 5th the ‘All Styles Karate Demonstrations’ took place at Butoku-Den in Kyoto. All the major styles took part, these included Goju-ryu, Keishi-Kempo, Nippon-Kempo-ryu, Shito-ryu, Shoto-ryu, and Wado-ryu. In 1944 Ohtsuka Meijin was promoted to Chief Instructor of all Karate under the Dai-Nippon-Butoku-kai. In 1945 the Americans, at the end of the Second World War, disbanded all martial-arts.
In 1951 all martial-arts were reinstated, after the signing of the American peace treaty with Japan. In 1955 the first Karate tournament took place, organised by Ohtsuka Meijin, it was called the ‘First All Japan Wado-ryu Karate Championships’. In 1964 ‘The All Japan Karate-do Federation’ (JKF) was established. This same year Tatsuo-Suzuki Sensei, Toru-Arakawa Sensei, and Hajime-Takashima Sensei introduced Wado-ryu to Great Britain, Europe, and the United States of America.
In 1966 Ohtsuka Meijin was awarded ‘Kun-Goto-Soukuo-Kyo-Kuju-jutsu-Sho’ (similar to the OBE in Great Britain) from Emperor Hirohito for his dedication to Karate. In 1972 he was awarded the title of Meijin from Higashino-Kunino-Miya (a member of the Japanese royal family) President of the International Martial-arts Federation the ‘Kokusai-Budo-Renmei’. Ohtsuka Meijin was the first man in history to receive this highest honour in martial-arts. For his services to Martial-arts, and to honour his new position as the highest Karate Authority in Japan, he was awarded the Shiju-Hoosho medal from the Japanese Government, the only man in the history of Karate to be so honoured.
On the 29th of January 1982 Ohtsuka-Hironori Meijin died at the age 89, he had practised martial-arts for 85 years. “Buno-michi-wa Tada-aragoto-na-to-omohiso Wa-no-michi-kiwa-me Wa-o-motomu-michi: The way to practise martial-arts is not for fighting. Always look for your own inner peace and harmony, search for it.” Ohtsuka-Hironori.