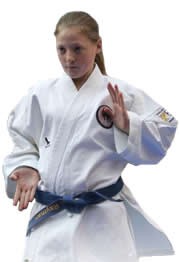 In Wado-ryu, the Kanji use for ‘KATA’ is 形 but other styles of Karate are using the Kanji 型. The first Grand Master, Hironori Ohtsuka Meijin, made this choice. These two characters of Kanji are read as ‘KATA’. However, the second character is also read as ‘I-GATA’ 型, which can be translated as ‘Mold’. The standardised ‘forms’ made from the I-GATA are all the same, they’re not transformable. Martial arts practise must never become ‘I-GATA’; it must always be ‘KATA’. 形

The first character of ‘KATA’ 形 does not imply ‘I-GATA’ and it can be translated as a transformable shape. ‘KATA’ is expressive; as a mirror is, it changes with every action and situation. A mirror figure changes just as its reflection does.

‘I-GATA’, for us in Wadoryu, is dead as it is expressionless and concentrates solely of importance of conformity and shape. It does not have an identity; ‘KATA’ is alive. The dead ‘I-gata’ is utilisable for only one purpose. Because kata is alive, it can be utilised for many situations. Thus, when using the kata of martial arts, one must use it in accordance to the meaning and objective it has, or else it becomes useless.

To use a kata that is alive is difficult, but it is important in all martial arts training, while it is utilisable in the area of arts especially for one concerned with professionalism.

A kata that is alive itself is invisible, but the progress to achieve that stage of aliveness gives the kata a spirit.

Each movement in a kata was made to be practiced without an opponent. When practicing, it is important to imagine opponents all around you in all directions and remember the objective, the application and the usage of that particular movement.

The best method of practicing ‘KATA’ is repetition. Although, after a period of time, one begins to better understand the procedure of one movement incorporating into the next movement. Of course, in some kata, a continuous combination may exist but one must not think about what comes before or after. While performing kata and following the order of the movement, one has to keep in mind to be ready for a sudden attack coming from any direction.

Each and every one of the movements put together makes a kata. Therefore to perform each movement properly, one must practice kata until being able to spontaneously move.

Ohtsuka Meijin elected 9 different kata in the Wado-Ryu system, which are; Pinan Nidan, Pinan Shodan, Pinan Sandan, Pinan Yodan, Pinan Godan, Ku Shanku, Nai-Hanchi, Seishan, Chinto. However, later, Kihon Kata, Bassai, Wanshu, Niseishi, Rohai, Ji’tte, Ji’han were also introduced, although he felt the most important kata to practice are only the first 9 kata from Pinan to Chinto. He properly taught only the 9 kata to the Wado-ryu disciples, because the same movements are already included in the other 6 kata. His idea was that, “How many kata one memorises is of no importance if one cannot apply the correct technique, it is a waste of time and stamina.”

KATA – ‘Form’, ‘formal exercise’. Prearranged fighting techniques put into a set, pattern or form. Karate Kata can be split into three schools: SHURI-TE: Pinan (Heian) Shodan, Nidan, Sandan, Yodan, Godan. Naifanchi (Tekki) Shodan, Nidan, Sandan. Passai (Bassai) Dai, Sho. Ku-Shanku (Kanku) Dai, Sho, Shiho-ku-shanku. Ji-tte (Jutte). Ji-in. Ji-han (Jion). Gojushi-ho Dai, Sho. NAHA-TE: Sanchin. Tensho. Gekisai-Dai-ichi, Gekisai-Dai-ni. Saifa (Sai-hawah). Seisan. Seipai. Sanseiru. Shisochin. Kururunfa (Kururun-hawah). Seienchin. Suparinpei. TOMARI-TE: Chinto (Gankaku). Rohai (Meikyo). Wanshu (Enpi, Empi). Wankan (Matsukaze). Others; Niseishi (Nijushi-ho). Sochin. Ananku. Unsu. Seishan (Hangetsu). The above-mentioned Kata have some variations. For example, Passai Kata has not only Dai and Sho, but also Matsumura no Passai (Passai of Matsumura), Tomari no Passai and Ishimine no Passai. In Uechiryu, although a Naha-te style, they developed a different series of Kata. These include Sanchin, Kanshiwa, Seishan, Seirui, and Konchin. Karate Kata which possess numbers as names are considered originally of Chinese and/or Buddhist origin, and passed into the Okinawan-te systems during the 1800’s. The numbers have been referred to as many interpretations and factors in modern martial-arts, either as the amount of steps, techniques etc. However, it is my personal belief that they have their history within the original teachings of acupoint striking within the Kata. For example, there are considered 36 ‘killing’ points on the human body (Sanseiru).

From personal research I have found that many of the ‘numeric’ Kata have their foundations within the original Chinese acupoint striking system practised in the mid 1500’s. It was considered the original method of ‘numeric strike-point’ combat, and was created by the Chinese Shaolin martial-artist Feng-Yiquan (see diagram below, ‘vital points’). Other Chinese martial-artists who studied this form of combat included the famous Xie-Zhongxiang. These ‘numeric’ Kata also include; Suparinpei (108), Gojushi-ho (54), Sanshiru (36), Nipaipo (28), Niseishi/Nijushi-ho (24), Seipai (18), Seishan/Seisan (13), etc., all, I believe, linked to the acupoint science. In Buddhism, however, numbers hold great symbolic importance, specifically referring to the 108 desires of man. This is very interesting as many of the Kata hold factors of 108, as: Suparinpei (108), Gojushi-ho (54), Sanseiru (36), Seipai (18), etc.

‘Three Temple Kata’. 参慈形 Refers to the 3-temple Kata of British Wadokai. Ji’tte, Ji’han and Ji’in form a group of kata beginning with the same characteristic kamae, which obviously has roots in ancient Chinese boxing.

Ji’tte, Ji’han and Ji’in form a group of kata beginning with the same characteristic kamae, which obviously has roots in ancient Chinese boxing.

Ji’tte 慈手 ‘Temple hand/s’. A Tomari-te Kata named after a Buddhist Temple and developed by the Shorei-ryu Karate master Itosu-Yasutsune. This Kata is practised within numerous Karate schools of Okinawa. Also known, although mistakenly, as Jutte; ten hands.

Ji’in 慈陰 ‘Temple ground’. Referred to as one of the ‘Lost Kata of Wadoryu’. A Kata of the Shuri-te and Tomarite Schools of Karate developed by Itosu-Yasutsune. Named after the Shaolin Temple, Ji’in-ji. Although Sensei Funakoshi did not teach this kata extensively, for us, as from a Wado perspective, it remains important due to the many simultaneous techniques and fluid stances; enabling quick changes and exchanges of direction whilst maintaining balance, power and steps of equal length. It has, ironically, been removed from the Japan Karate Association and Japan Karate Federation teaching & grading syllabus, which is why it has lost popularity in ‘Shiai’ (competition). However, due to the wealth of important Tai-sabaki elements contained within, British Wadokai has retained it for its important fundamental value for the traditional Wado Budo-ka.

Suparinpei 壱百零八 ‘One-hundred and eight’. Referred to as one of the ‘Lost Kata of Wadoryu’. Suparinpei, originally known as Petchurin, was introduced to Okinawa from the Fukien Province in China over 100 years ago. Involves fast and slow complex movements with harmonised breathing control. The most advanced of the 13 Goju-ryu Kata developed by Karate master Chojun-Miyagi. Involves movements with harmonised breathing control. Contains 108 fighting movements symbolising, it is said, the 108 desires/temptations (violations) of man, as listed in Buddhist doctrines. However, as there are considered 108 major stunning and killing points on the human body, my personal belief is that this Kata has its origins from the acupoint school originally established by Feng-Yiquan. Additionally, Susruta-Samhita was an Indian medical Sastra of the 2nd century AD. Susruta wrote the book to give information highlighting the ‘108 vulnerable points’ on the body.

This Kata (as with Unsu) was practised by Ohtsuka-Sensei. However it was believed that, as it did not reflect the correct ‘concepts’ of Wado-ryu, it was dropped from the school in the very early years of the style’s development. However, due to its popularity amongst Wado-ka, it has resurfaced. The ‘new’ Wado version of this Kata was recreated in 2001 by Hakoishi Katsumi 8th Dan and is now practised within all JKF-Wadokai Dojo throughout the world. In Wado, Suparinpei is still undergoing changes and influences,
depending on who tends to be involved with the Technical Directorship within JKF-Wadokai. However, British Wadokai practises the version that was first introduced into the UK by Hakoishi Sensei and practised by Sakagami Sensei back in 2003.

PETCHURIN (China). A Kata formulated in the early 1600s by a Chinese martial-arts master known as General Ye-Fai. It was then taught to Naha-te founder Higaonna-Kanryo in Fou-Chou, of the Fukien Province, between AD1868-1881 by the Chinese Shorinji-Kempo master Ryu-Ryu-Ko (Xie-Zhongxiang). It was later passed on to Goju-ryu founder Chojun-Miyagi, where it was renamed Suparinpei. See Suparinpei. See also Xie-Zhongxiang.

XIE-ZHONGXIANG (China). Xie-Zhongxiang (AD1852-1930). A master of Shaolin Chuan-fa, known in Japanese as Ryo-Ryo-Ko, who lived in the Fujian Province of China. His system was based on the acupoint striking method originally founded by Feng-Yiquan in the early to mid 1500’s, using variations of 36 (36, 72, 108 etc.). Xie-Zhongxiang went on to develop and expand this numeric concept by dividing, multiplying, etc., this mathematical principle even further. His students included the famous Higaonna-Kanryo, Miyagi-Chojun, and Nakaima-Norisato etc. See also Susruta-samhita, Acupoint, and Feng-Yiquan.

Excerpts taken from the ‘Wado Comprehensive’ and an ‘A to Z of Martial-arts’, written by GE Swift Kyoshi.

The objectives with the British Wadokai Standardisation Course is to ensure that all members within British Wadokai are practising and teaching the correct form of Wado as laid down by Ohtsuka Hironori Meijin and Suzuki Tatsuo Hanshi.

The techniques of British Wadokai, which include, Kata, Sanbon-gumite, Ohyo-gumite, and Kihon-gumite were introduced into the UK in 1964 and are the most important primary foundations of British Wadokai Karate-do. There should be no modification or deviation from these principles and techniques. It is not Wado if these primary training elements are not practised correctly.