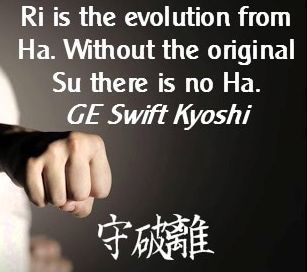 1. Su 守 – Observe/Protect. Indicates that a beginner must correctly copy all Wado karate techniques and concepts from his instructor. A student must not deviate from the path of the correct techniques being taught.

2. Ha 破 – Expose. Means that after a number of years of training, when the Karate-ka has attained a sufficient level black belt, he is allowed to analyse and develop techniques provided they are improvements to his ‘own’ Wado. This applies to all movements, however, a student’s own development must not violate, or effect, the fundamental development of other students; as they must discover and travel the path of Suhari for themselves. When a Wadoka has successfully understood all there is to understand within Wado, from his instructor, then he may consider himself a step towards ‘Ha’.

3. Ri 離 – Evolve. Is the highest form. It means that after an even longer period of training than for HA, the Karateka must be able to perform all forms of karate automatically, not stopping to think about his moves. He can evolve and move forward.

Some Chinese martial arts have a similar suhari three-stage concept to Mastery:

1. Di 地 – Earth. Basics. To experience movements at the fundamental levels.
2. Ren 人 – Human. Ready to learn. (Some Chinese martial grand-masters equates the entry to this level as the Japanese belt system level of black belt 1st Dan (rank)
3. Tian 天 – Sky/heaven. No conscious thought, flows/moves like the elements. This stage takes years of training and coaching from other Grandmasters.

“Su Ha Ri”. Master Ohtsuka tells us that the term has been around for a long time, and also exists in many other forms within Japanese culture, including the Japanese Tea Ceremony, etc. For example, in the military, we see Suhari being implemented with new forms of weapons, arms and tactics, etc. Each system (or social criteria) has its own interpretation of Suhari, but all follow a similar pattern. With ‘traditional’ arts, however, which wish to maintain traditional values and techniques, such as certain forms Karate, etc., the ‘individual’ attains self-awareness to his skill through Suhari; which allows him to develop as an individual; rather than changing the whole traditional system to suit the single practitioner.

Ohtsuka Sensei adds the postscript that these levels of attainment depend on the natural ability of the individual student/practitioner, as well as the circumstances and environment necessary for the student to flourish – something not easy to accomplish.

However, it must be remembered that these should be personal developments NOT teaching developments. For example – we would not teach our own short-cuts/habits to our students as our students have not attained the same knowledge and/or experience through their own personal mechanical development. For a student to flourish he must develop within his own style of mechanics with his own expression and personality through personal awareness – ‘He must become himself’. (MI-CHI)

When we teach someone to drive a car, for the first time, we teach the basics/fundamentals of the required driving skills that has been ‘tried & tested’ for a safe and educational development. Prior to pulling away from a junction we are taught to use ‘mirror, signal, manoeuvre’, as a precursor to joining the traffic. If we were to teach our own ‘shortcuts’ and (in many cases) bad/modified habits, which we ourselves have attained through many years of driving, then the student may very well miss out on the awareness of some very valuable information now lost to him.

When we teach students Wado Karate we teach from scratch in the same way as our teachers showed us when we started on the path and through our development. After time our students will reach a point where they too will develop their own technique and movement through their own ability and progression. Although, as individuals, we may reach ‘Ha’ and ‘Ri’, we must still remain within ‘Su’ for our teachings.

British Wadokai has always taught the TRADITIONAL and ORIGINAL Wadoryu that was introduced into the UK from the ‘original’ JKF-Wadokai (Ohtsuka Meijin’s original organisation). Extra elements were introduced, by Suzuki Hanshi, such as the revamped Sanbon-gumite (Sanbon-gumite was dropped by the JKF-Wadokai Japan (as believing not being relevant within modern competition) although some JKF-Wadokai Dojo still teach versions of it – Even Ohtsuka Hironori Saiko-Shihan, of the Wadoryu Karate-do Renmei, taught variations of Sanbon-gumite), Ohyo-gumite (which were introduced to help in the development of Wadoryu sparring; again this was dropped in many ‘modern’ Wadoryu schools due to competition relevance and restrictions) and Renraku-waza (a transition from Ido-Kihon and Kata to natural fluid/flowing ‘free-fighting’ movement). However, everything for us has remained intact from this time – NOTHING HAS BEEN TAKEN AWAY or REPLACED.

The Wado created in Japan by Ohtsuka Meijin and introduced into the UK in 1963, and then permanently in 1964, by Suzuki Hanshi have, we feel, remained the same through British Wadokai.

There was a very valid reason why Ohtsuka Meijin originally chose Suzuki Hanshi as his original choice as technical successor.

When a student creates and modifies his technique he is only modifying HIS OWN technique to suit his own natural mechanical ability/development. He should not assume that this technique is ‘better’ for everyone else and teach this to his own students; that is a decision for his own students to make after they have attained many years of their own ’correct’ training through Su.

“There is nothing wrong with adding to a repertoire of technique, but do not change or replace our true historic Wado Karate.”

In 1982 British Wadokai introduced extra-curricular elements to enhance the student’s ability and performance, such as the Tanto-dori (knife-defences), later the I-dori (kneeling defences) and then the Muto-dori (sword defences). These are additions to British Wadokai not replacements. Our syllabus has remained and WILL remain the same as it’s done since 1964. 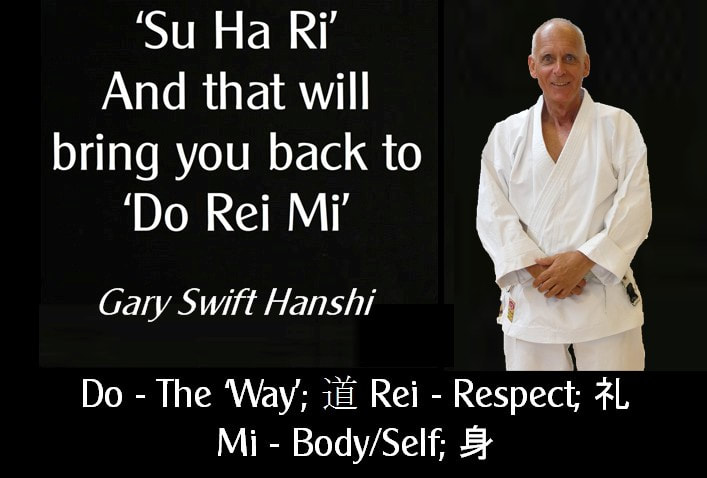