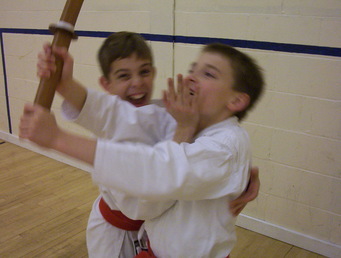 IDORI-NO-KATA = Japan. ‘Seated defence form’. Refers to the ‘classical’ kneeling defence techniques popular in numerous ‘grappling’ martial-art systems, also found in Karate styles such as Wado-ryu, etc. The Idori-no-kata of British Wadokai originate from the Suzuki School of Karate and the JKF-Wadokai.

The Idori-no-kata practised within British Wadokai are those taught by Sensei Tatsuo Suzuki Hanshi of the Wado International Karate-do Federation and the Japanese Karate Federation (JKF-Wadokai).
NB: For the benefit of students who have ‘problems’, during certain kneeling exercises, British Wadokai have implemented ‘chair-seated’ and ‘standing’ variation alternatives to the classical Idori.

AI-NUKI = Japan. ‘Ai-Nuki’, which means that you do not ‘crash’ with your opponent, but naturally move to a good position to defeat him using his own power. Physically you never get hurt – mentally you never have arguments. This is the meaning of the ‘Wa’ in Wado. Harmony inside and outside yourself through ‘Ai-Nuki’. Ai-Nuki derives from the art of Japanese swordsmanship. The highest teaching (Okugi) of sword, called Aiki, refers to a method of escaping unharmed without cutting your partner. It is also called Ai-Nuki. In the Yagyu style of sword it is Katsu-Jin-Ken, the sword that gives life (Satsu-Jin-Ken is the sword that kills). Within Muto-dori-no-kata (as well as Tantodori-no-kata) you have a choice of taking life or giving it.

BATTO = Japan. ‘Drawing the sword’. The classical process of drawing a sword in preparation for combat/defence. Terminology used in Iai-do.

BATTO-JUTSU = Japan. ‘Sword drawing method’. Refers to the Japanese sword-drawing techniques where the concept is to strike instantly; to draw and cut without pause.

BOKUDEN-TSUKAHARA = Japan. The founder of the Bokudenryu, a school of Ken-jutsu. The famous swordsman who was reputed to be as lethal with the Bokuto as he was with the blade. He died in 1571 at the age of eighty years. He fought nineteen times, man to man with a live blade, his first at the age of seventeen. He fought and killed more than two-hundred enemies, most with the Bokuto.

BUNBU-RYODO = Japan. ‘Writing and military paths’. The importance of the education and teaching of the warrior – “The pen and the sword, are the same thing”.

CHI-BURI = Japan. ‘Blood clearing’, blood letting’. A blood-removing technique used, in Iai, to ‘clear’ the sword-blade of blood prior to replacing it into the Saya.

CHI-NUGUI = Japan. ‘Blood wiping’. To wipe the blood from the blade. Usually performed just above the knee on the right leg.

HA = Japan. ‘Edge’. Refers to the cutting-edge of a Japanese sword-blade.

MUTO-DORI = Japan. ‘No sword movement’. Refers to unarmed defence techniques and skills against an armed Samurai. Part of the Tachi-ai-no-kata series found in the more traditional/classical Wado Schools of Karate-do.
MUTO-DORI-NO-KATA = Japan. ‘No sword movement form’. The classical form/s of unarmed defence against an opponent with a sword, practised within the British Wadokai Karate-do Federation. The Muto-dori-no-kata practised within British Wadokai were introduced by Gary E Swift (8th Dan) Kyoshi in 2001. The techniques are based on the defences against the sword attacks of the Mamoru-ryu-ha Ken-jutsu, which also emphasise defence-elements/principles reflected within Yagyu-ryu and the tai-sabaki of Wadoryu. The techniques were created so as a defender attempts to regain possession of a sword, due to previously losing his own sword, demonstrating and utilising Wadoryu Tai-sabaki.

NO-TO = Japan. The classical techniques within Iai to return the Katana, once drawn, to the Saya. The process of re-sheathing a sword.

TAN-TO = Japan. ‘Short blade’. A bladed weapon that has a Nagasa less than 1 Shaku. The Japanese dirk, knife, or dagger worn by the Samurai along with the Wakizashi and Katana. Samurai women sometimes carried Tanto for self-defence and even suicide.

TANTO-DORI = Japan. ‘Short blade movement’. Techniques against the use of the Tanto.

TANTO-JUTSU = Japan. ‘Short blade method’. The art of using or throwing a knife. This form of practice was popular during the feudal period of Japan.

TANTO-DORI-NO-KATA = Japan. ‘Form of knife movement’, ‘knife movement form’. Refers to the ‘classical’ knife-defence forms found in numerous Japanese martial arts. Also forms an integral part of the Wado-ryu Karate-do system. The Tanto-dori-no-kata practised within British Wadokai is a collection of movements from various schools, including Wadoryu, Aikido,  Hapkido, etc. The techniques acquired from outside of Wadoryu have been manipulated and modified to reflect correct Wado technique and performance, to enhance the performers ability of flexibility of assimilation.

TO = Japan. ‘Blade’. A term to describe the curved single-edged Japanese sword. Also a term to describe any sharp blade as the: Iai-to; Iai-blade, Ninja-to; the blade of the Ninja, Tan-to; short-blade (knife), etc.

TSUBA = Japan. ‘Hand guard’. The hand-guard found on bladed weapons as; Katana, Wakizashi, and Tanto etc. Some of the later Tsuba became very ornamental and collectable.

TSUKA = Japan. ‘Hilt’, ‘handle’. In traditional sword making there would be two pieces of magnolia-wood sandwiching the Tang; the Mekugi would secure the three pieces together through the Mekugi-no-ana.

UCHI-GATANA = Japan. ‘Inside sword’. The method of wearing the sword edge upwards inside the belt, popular during the Muromachi period.

UCHI-GATANA = Japan. ‘Striking sword’. Refers to a sword that would be used for conflict.

WAKI-NO-GAMAE = Japan. The guard position where the Katana is hidden behind the body. A combat position with the sword held close to the body and pointing away from the opponent, allowing it to become invisible from view. See Go-gyo-no-gamae.

WAKI-ZASHI = Japan. ‘Flank sword’, ‘side sword’. Similar to the design of the Katana, although smaller, and worn on the left-hand side of the body. The rank of the Samurai was recognised by the wearing of the Katana and Wakizashi together under the belt.

YAKIBA = Japan. The tempered hardened edge of the Japanese sword.

YASURI-MEI = Japan. ‘File signature’. The file marks left on the Nakago. The ‘signature’ of the sword-maker. Each sword-maker has an individual technique or method of filing; this is sometimes the only way the origin of the sword can be recognised.

Fundamentals of the sword.

Do (abdomen cut). This cut is done when facing your opponent. The cut runs from left to right across the abdomen just above the hip bones. This cut aims to avoid hitting neither the hip bone nor the rib cage but instead directed to cut the vital organs in between.

Kiriage (upward cut). Kiriage is the total opposite of Kesa giri cut. It follows a diagonal line from the top of the hip to the opposite shoulder and follow through several inches pass the target.

Kote (wrist cut). You can deliver this cut only when your enemy is facing you holding his sword. The Kote cut is delivered s a straight down cut to the wrist area. This cut permanently leaves the opponent disabled specifically the wrist to hand part.

Men (straight down head cut). This fatal cut is a straight down cut to the top of the skull. When practising in the air, you should follow through to about abdomen level although some styles follow through well past the groin. It’s highly unlikely that you would ever bury the sword deeper than the skull, but the mental intent of cutting further down will strengthen you cut immensely.

Tsuki (straight thrust). A two or one-handed cut. Some styles use one handed techniques when making a tsuki cut. The Tsuki strike targets are: straight into the eyes, throat, belly, or ribcage. When striking to the ribcage, you can either make a straight thrust or turn the blade sideways as you thrust in and push out the side in one fluid motion. You’ll slide in between the ribs, and exit out the side. When striking to the throat, do these movements then turn the blade sideways and thrust it. Lastly, push out the side to free your blade.

Excerpts taken from the ‘Wado Comprehensive’ and an ‘A to Z of Martial-arts’, written by GE Swift (8th Dan) Kyoshi. 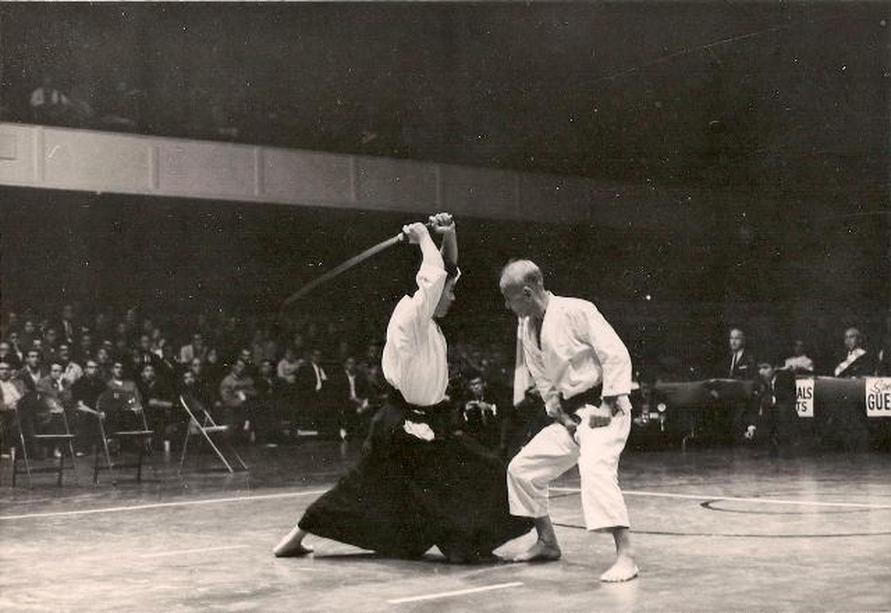